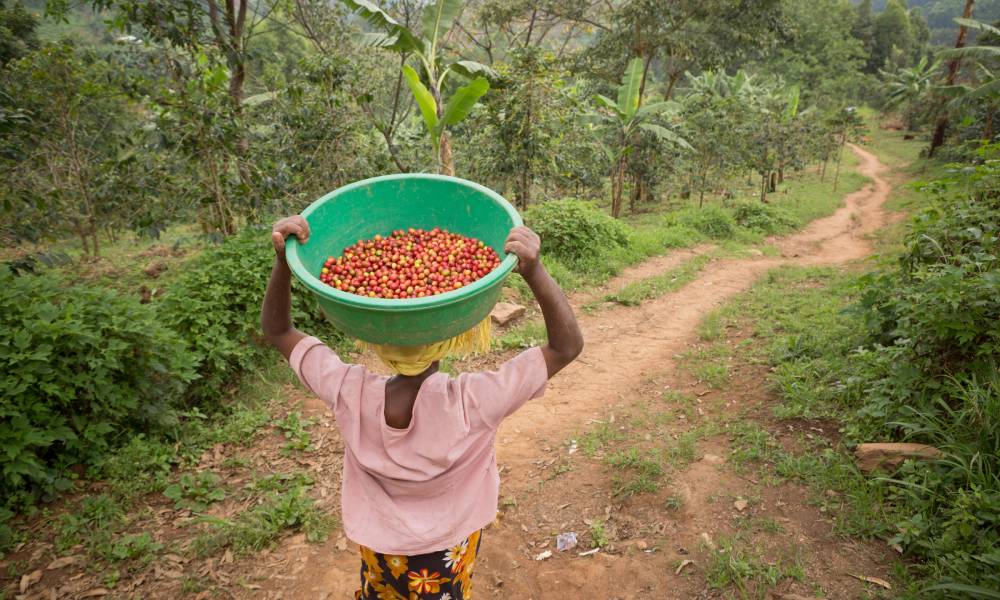 A FEW years ago, Ugandan coffee scarcely got a mention in specialty coffee circles. Producing roughly four times as much robusta than arabica, it developed a reputation for low-quality coffee that was incapable of competing on the international market.

However, Uganda’s coffee production has come of age in recent years.

A coordinated effort between government and private businesses has enabled it to leapfrog several notable coffee-producing nations not only in volume, but quality. In a 2018 survey of the top 16 coffee-growing countries in the world, Uganda was ranked third best by CQI-certified coffee tasters.

According to Herbert Mbabazi of Olam Specialty Coffee, a green coffee importer, government intervention has been a key driver.

“In 1991, the government set up a body that would manage the entire coffee industry called the Uganda Coffee Development Authority (UCDA),” explains Herbert, who works as a senior field officer. “The UCDA has a mandate of increasing production and has been doing this very well with the country’s majority smallholder producers.”

An early example of where intervention has worked was in the 1990s, when coffee farms were struck by an outbreak of coffee wilt disease. In response, the government drafted in the help of scientists to create more resilient varieties. These varieties were then distributed to farmers, which helped them manage diseases, adverse weather conditions, and produce higher yields.

More recently, the UCDA has helped set up nurseries with the goal of handing out 300 million free coffee seedlings to farmers across the country. The nursery operators both supplied and supervised the planting of the seedlings to ensure maximum results.

This is part of the government’s wider strategy to revitalise Uganda’s coffee producing sector, and introduce the scale and coordination often found in Latin American origins. In 2015, it set itself the goal of raising annual output from 3.5 million 60kg bags to 20 million. Last season’s harvest, which produced around 6.5 million 60kg bags, suggests the plan might not be as ambitious as it seems.

“We have a fully-fledged entity responsible for variety improvement that is funded by the government and its partners,” Herbert adds.

A new generation of farmers

Establishing Ugandan coffee on the world stage and raising production figures rests heavily on bringing through a new generation of talent.

Historically, one of the main issues of producing consistent high-quality arabica was a lack of proper education. For example, farmers would often strip branches of coffee cherries, rather than carefully picking them. This resulted in unripe green cherries getting mixed up with ripe ones.

As a result, there has been significant emphasis on training up young Ugandans with no formal education to become competent coffee farmers.

“We have seen a lot of private companies invest in Uganda, such as Sucafina and Olam,” Herbert says. “They’ve focused on sustainable approaches to coffee production. This often involves giving producers free training, free seedlings, and inputs at subsidised rates. People who previously had no interest in coffee farming are now becoming accomplished producers through these initiatives.”

In addition to training, both government and private firms have invested in consistent quality control to raise cupping scores. In 2016, for example, Uganda’s two largest coffee traders, Ecom and Kyagalanyi, set a minimum of 90% red cherries before they would agree to buy the coffee.

The results have been impressive. Where before, Ugandan beans were typically mixed with Tanzanian or Rwandan coffees and labelled as a “regional blend”, they are now being marketed as standalone single origins and sold at a premium. China is just one of a number of countries that has recently raised imports of Ugandan coffee to meet soaring demand.

“We have an arabica product that is not found elsewhere apart from Ethiopia, called DRUGAR (DRy UGandan ARabica),” Herbert says. “DRUGAR is arabica dried after harvesting the cherry and then hulled without washing. Of late, we have attracted a considerable market for this product because of its unique flavours.”

Can Uganda become the coffee king of the east?

As the birthplace of coffee, East Africa is host to some of the world’s top producing countries.

Combined, it accounts for nearly 10% of all global production. But each country produces coffee with its own distinct set of characteristics thanks to the diversity of the environments and the unique approaches to cultivation.

While Uganda has traditionally sat behind Ethiopia in terms of volume and both Kenya and Rwanda in terms of quality, the landscape is shifting.

In Kenya, many farmers have become increasingly disillusioned with the low prices of coffee coupled with the astronomical costs of production. As a result, they have abandoned coffee for other better paying crops, such as macadamia and avocados.

In Ethiopia, meanwhile, the outbreak of civil war has forced many farmers to relocate and abandon coffee production altogether. This has put a serious dent in coffee production, which has simultaneously been grappling with erratic weather patterns. In recent months, the country’s coffee-growing regions have prolonged droughts, followed by excessive rainfall.

Uganda has already cemented its place as a coffee-producing heavyweight in East Africa. Yet buoyed by the government’s focused investments on farms and the growing interest in Ugandan coffee abroad, Herbert believes it could soon challenge the region’s quality-centric origins, too.

“Looking at what is trending now, I can tell you the future of our coffee is bright.”