From shisha to specialty: How Jordan’s coffee culture went premium 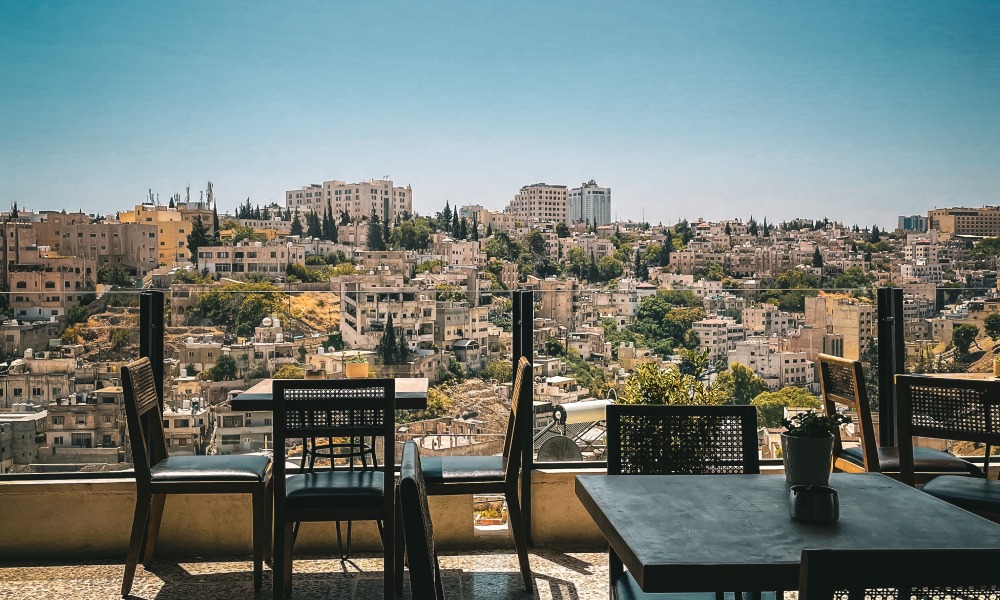 THE YEAR 1981 was a very different time for Jordan. Fewer than 50 years had passed since its independence from the British and it was still finding its feet in a region characterised by political upheaval on all sides. It was also the year that the country’s coffee consumption was at its lowest – just 0.060kg per capita.

Today, a new landscape has emerged and, with it, a thriving coffee culture. The streets of Amman, Jordan’s capital city, brim with coffee shops open all night long, where shining Arabic coffee pots – known as dallahs – serve visitors by the dozen. And, more and more, consumers are going in search of higher quality coffee from a range of origins.

Hisham Abubaker, the founder of Dimitri’s Coffee, Jordan’s first specialty coffee roaster, has seen the market evolve first hand. He explains that the booming interest in coffee, particularly Western-style espresso and filter, is mostly linked to the health of the country’s economy.

“Over the last 10 years, it’s been about developing the economic situation in Jordan,” he says. “Restructuring the economy and making a lot of international agreements so that it can thrive. In 2005, Starbucks opened here and some other coffee shops began adopting foreign ways of brewing coffee, such as espresso and sweetened drinks – and people liked it.”

This was a change from the traditional Arabic coffee that most Jordanians were familiar with. Like other countries in the Middle East, Arabic coffee involves finely grinding dark roasted, cardamom-flavoured beans and drinking them unfiltered.

While this remains the preferred method for most, a young, affluent generation of Jordanians who have travelled the world and picked up a taste for specialty coffee are helping drive the movement towards lighter roasted coffee.

“Currently, we have around four specialty coffee roasters in Jordan,” Hisham tells me. “This is because specialty coffee is still expensive and people do not always appreciate it. But our cafés are always full at night.”

Naturally, when a Western-style coffee culture emerged, many Jordanians were struck by the differences in price. At Starbucks, for example, a cup of coffee costs around three Jordan dinars ($4.20). This was almost six times the price compared to streetside cafés where you could pick up a coffee for around half a dinar ($0.70).

However, it wasn’t the only difference. In Jordan, smoking shisha is a deeply ingrained part of the culture in a country where alcohol is prohibited. It forms the centrepiece of everything from business meetings to socialising with friends. And the place shish is most commonly found is the cafés where you would also drink coffee.

Hisham explains that the rise of specialty coffee has represented a split from the link between smoking shisha and consuming coffee.

“Before 2015, foreign coffee brands were the only coffee shops that didn’t sell shisha,” he says. “Most of the local coffee shops were shisha shops. Since then, a number of coffee businesses have thrived because a lot of people want to drink coffee without shisha.”

Indeed, it’s difficult to imagine where shisha would fit into the sleek interior of Dimitri’s or any of the country’s other specialty coffee shops. Instead, the focus tends to be more on appreciating the coffee’s distinct characteristics and using the space to aid the experience, whether through indoor plants, atmospheric lighting, or floor-to-ceiling windows.

This trend was only accelerated by the Covid-19 pandemic, when many people got used to working remotely rather than in the office. As lockdown restrictions eased, this transitioned from the home to the local shop. “Now, people will stay at cafés for seven or eight hours a day working, having coffee without shisha,” Hisham says.

The future of Jordan’s coffee culture

Although just one example, this demonstrates a common trend that has emerged in Jordan which seeks not only to celebrate its rich coffee culture, but also to stir up engagement among younger generations in the specialty market.

Offerings from roadside roasters and Turkish coffees drunk alongside shisha are still an immensely popular and important part of the daily life for millions of Jordanians. They are affordable for the majority of the population and serve as a tool to socialise, show hospitality, and take time to relax.

However, there is little doubt that a new wave is picking up momentum. Hisham points to cold brew as an example of how many are embracing a wider variety of coffee-based drinks and origins.

“It’s interesting,” he says. “Cold brew arrived a couple of years ago and it’s become popular among Jordanians. It’s strong and has a lot of caffeine, which people look for. Cappuccinos, lattes, and even iced lattes are also very popular, with coffee from Kenya or Ethiopia or Colombia. Brazilian coffee is traditionally used for Arabic coffee, but people now want a selection of origins.

“The same is true of pour over. The older generation still prefer the coffee maker machines, but the pour over is getting more popular because after they were introduced to it, people can see that it makes a big difference.”

So does this mean that Jordan’s traditional coffee culture will one day die out? Hisham thinks not. “The traditional and modern forms of brewing are thriving and co-existing,” he explains.

“There is a new generation of specialty roasters, cafes and consumers, and a new growing coffee culture. The introduction of specialty coffee to the market is certainly stirring things up. But it’s doing so for the better.”

From shisha to specialty: How Jordan’s coffee culture went premium