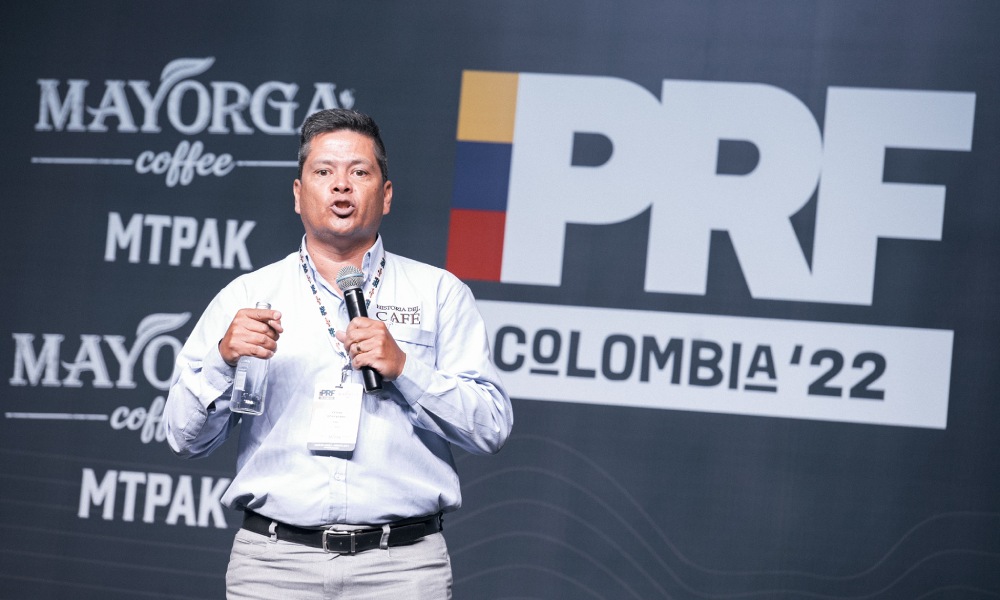 DOZENS OF keynote speeches and panel discussions from some of the coffee industry’s leading figures are now available to watch on video streaming platform YouTube.

The insightful talks cover a range of subjects, from the value of experimental processing and the importance of blends to price volatility in the C market and emerging trends in the Middle Eastern coffee sector.

They were delivered live at this year’s Producer & Roaster Forum held at Plaza Mayor in Medellín, Colombia. Held across two days, the event attracted thousands of coffee professionals from around the world, including producers, traders, roasters, and business owners.

It is estimated to have generated more than $10 million in sales, while directly employing over 50 people from around the city.

The talks and panel discussions were a key feature of this year’s PRF. Two stages – one in English, the other in Spanish – hosted 48 presentations and 31 coffee experts from a range of countries, including Colombia, Brazil, the UK, Germany, Switzerland, the US, and the United Arab Emirates.

Representatives from a number of companies spoke, from Nestlé and Toddy to Caravela, Equal Origins, and Fire Department Coffee.

“In order for the coffee industry to develop and grow, it needs information, knowledge, and education,” said a coffee producer at the event. “The talks at PRF serve that purpose, helping producers of all sizes raise their standards and produce high-quality products.”

This week, every talk and panel discussion was uploaded to the official Producer & Roaster Forum YouTube channel.

If you hadn’t noticed, cold brew is everywhere and it’s transforming the coffee industry right before our eyes.

In this keynote speech, Matt Swenson covers the soaring popularity of the cold brew and RTD markets and what the future has in store for them.

Matt is the director of coffee for Nestlé Coffee Partners (NCP). Having first started working as a barista back in 2000, his passion for the art and science of coffee has led him to take on several different roles in the coffee and beverage industry, including trainer and consultant.

Pedro Echavarría on “What Happens If The Market Runs Out Of Coffee?”

It’s the scenario that nobody wants to acknowledge: could we be looking at a future without coffee?

Pedro Echavarría confronts the question head on in this fascinating and insightful keynote talk.

Pedro has worked as a coffee market analyst since 1990 and has been a member of the FNC since 2002. Today, he works as an advisor for several companies, including Cafe de Santa Barbara, Colorquimica, and Brinsa, to name just a few.

Women play a crucial role at all stages of the coffee supply chain, from seed to cup. However, they are often unappreciated in comparison to their male counterparts.

In this keynote talk, Nicol Moreno discusses how the role of women in the industry has evolved, while highlighting how the future of the coffee sector relies on greater female participation at every level.

Nicol is finance and international trade professional, and third-generation coffee farmer. In 2019, she founded the specialty coffee brand, Constantine Café, in which 99% of the staff are women.

Edwin Noreña on “Experimental Processing: Is It The Route To Differentiation?”

Experimental processing techniques on the rise in the coffee sector and offering differentiated coffees has become the goal of many producers around the world.

Edwin Noreña – a fourth-generation coffee producer – has managed to innovate and produce high-quality coffees thanks to experimentation on his farm. In this keynote talk, he discusses the value of experimental processing and the preconditions required to make it a success.

Edwin is a a professor at the University of Antioquia, where he teaches about processing, transformation, and sensory science. As a Q grader and Q processing expert, he has also worked as a leading judge at the Cup of Excellence Colombia and in the Yara Champion Program.

Panel on “Why Are Blends Important To The Coffee Sector?”

In this panel discussion, Tony Dreyfuss, Dale Harris, and Freda Yuan break down the appeal of blends, from their economic benefits to their “aesthetic” qualities.

Tony is the president of Metropolis Coffee Company in Chicago, Illinois, which he co-founded with his father, Jeff in 2003. With more than 20 years experience across various segments of specialty coffee, he operates Metropolis with the belief that there should be enough value, financial and aesthetic components in a well-sourced pound of coffee to sustain everyone along the chain.

Dale leads ‘Product and Business Development’ at OCRi, a global operator with roasting brands in the UK and NZ. A founding member of the Barista Guild of Europe, he held the positions of BGE Chair and Director of the SCAE. Many of you may also remember him as World Barista Champion, an accolade he won in 2017.

Freda is director of coffee at Origin Coffee Roasters. She is 3 x SCA UK Cup Tasters Champion and both 3rd and 5th place in the World Cup Tasters Championship. Throughout her career, she has worked across all sectors of the coffee supply chain. During this journey, she found her true passion in the sensory elements of coffee.