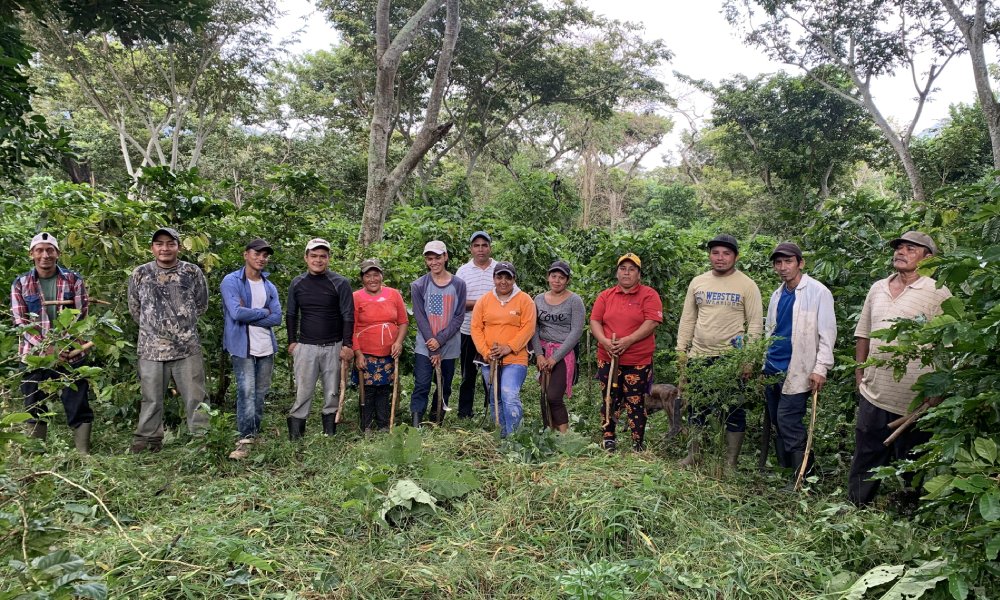 IN A small rural village in El Salvador, there is a football team which shares its name with the famous Spanish giant Real Madrid.

Although it continues to play every Sunday, and occasionally wins matches, it has a problem: its team members regularly leave, either departing to the urban areas or heading northward to the US.

This is a problem that’s not unique to rural football teams, however. Faced with the challenges of volatile market prices, leaf rust diseases, and soaring costs of production, El Salvador’s coffee farms are also suffering from a lack of manpower.

Indeed, according to the UN, 1.6 million Salvadorans lived abroad in 2019, comprising roughly a quarter of the country’s total population.

“During the picking season we do not have enough people to do the work,” says Liza Samayoa, a Salvadoran coffee producer who runs Café L’Étranger alongside her husband, Ernesto.

The estate has been in their family for five generations and they have had to overcome a number of challenges during that time. The mass exodus of workers is one of the most difficult yet.

“Within decades, people have been leaving the country due to the lack of opportunities, also political violence, and insecurity that has now improved, and now people are leaving because of the economic challenges, the low incomes,” Ernesto explains.

A recent report published in the Harvard International Review found that low global coffee prices since 2010 had forced more than 80,000 Salvadoran small coffee producers and coffee pickers off the land.

However, a handful of innovative coffee producers are taking a renewed approach to not only stem the flow, but to put El Salvador back on the global coffee map and give hope to young farmers.

Obstacles on all fronts

The situation is tough for those who rely on coffee production to make a living and yields have naturally been affected.

Recent figures from the US Foreign Agricultural Service show an alarming drop in overall coffee exports, from highs of 175,000 tons in 1979 to just 42,143 tons in last season’s harvest.

For every 45,000 tons that production falls, approximately 10,000 jobs are estimated to be lost. This pushes workers into further problems, as they are often left with no choice but to try to find job opportunities elsewhere or suffer the effects of poverty.

However, while labour shortages do have an impact on yield sizes, they are usually the symptom of other issues rather than the cause.

For example, around a decade ago, a devastating outbreak of coffee leaf rust had a lasting impact on harvests, leaving plants weak and vulnerable to further infection.

At the same time, drought, followed by sporadic periods of rainfall, across the region increased as the effects of climate change became more potent.

And, more recently, Salvadoran producers have been hit by the same combination of difficulties felt by many across the globe: rising costs of production caused by Covid-19 and the conflict in Ukraine which have affected the supply of fertiliser and made transport increasingly difficult.

The power of innovation and hope

For Liza and Ernesto, the combined impact of rising costs and falling prices hit a turning point about five years ago, and they realised that in order to survive they needed “a big transformation of our agricultural practices to improve the quality of our beans”.

Innovation allowed them to move into the specialty coffee market and start to export directly to roasters in the Middle East, Europe, and South America.

To do this, Liza and Ernesto experimented with new farming and post-harvest techniques, such as controlled fermentation and innovative drying processes, as well as trialling the potential in new varieties of coffee.

They were searching for processes able to deliver on quality, while being resilient enough to cope with the local microclimate and instability caused by climate change.

Their efforts led them to enhance the Cuscatleco variety attributes, which is well suited to the area as it can thrive in the middle altitudes of the region and has a better resistance to coffee leaf rust.

“Cuscatleco is not well known in the buying countries,” Ernesto says, “but we are promoting it because it can have a big social impact, in addition to its potential high cup profile achieved through the right milling process.”

The Samayoas are now keen to share their knowledge and experience, which they do through The Coffee Hope Project, their social impact initiative.

“We try to create opportunities so people don’t have to live in abject poverty in the countryside,” Liza explains.

The project aims to share technical training and expertise and also purchases the harvests of local small-scale farmers at a sustainable price. They currently work with around 30 smallholdings in the area and are keen to expand.

“We help them improve the quality of their coffees so we can pay them a much higher price than they could otherwise get locally. If we don’t help these small farmers to be profitable they will be out of the business,” Ernesto says.

Liza and Ernesto are happy with their decision to stay and innovate in order to make their estate sustainable. “To keep working to help others is paramount,” Ernesto says.

“The main challenge is overcoming the cultural and subconscious mindset, which can be resistant to change. You have to be humble, and you have to learn in order to improve and move forward.”

Café L’Étranger is a Host Sponsor at next year’s Producer & Roaster Forum in El Salvador.

Following a hugely successful event in Medellín, Producer & Roaster Forum will bring together thousands of coffee professionals and industry leaders from around the world, offering a unique opportunity to network, participate in workshops, listen to talks, and join roundtable discussions.