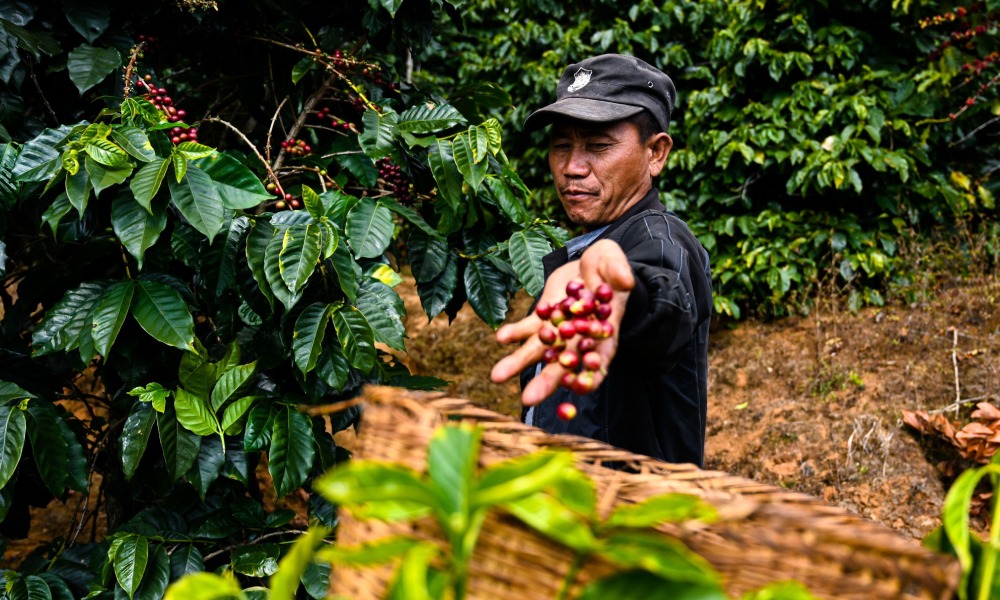 UNTIL THE 1990s, coffee was rarely served in China.

Few foreign companies were willing to take a punt in a country full of avid tea-drinkers, where the possibility of losing out was all too real. The majority of coffee consumption, as a result, was limited to airport lounges and luxury hotels.

In the end, it was Starbucks who paved the way, entering the Chinese market in 1999 when it opened a store in Beijing’s World Trade Building.

From that point on, a thriving coffee culture has bloomed, with both international and homegrown brands rapidly expanding across the country.

Today, Shanghai, China’s second biggest city, is home to the most number of coffee shops in the world, while consumption is reportedly rising at 15% per year – seven-and-a-half times the global average.

But China’s impressive coffee story hasn’t only been one of consumption. Production, concentrated almost entirely in the southwestern Yunnan province, has also flourished.

Over the last two decades, coffee production in Yunnan has jumped by more than 1,000%, reaching 131 metric tons last year.

With it, quality has risen too. Having long been viewed as inferior to coffees from more well-known origins such as Colombia and Ethiopia, Chinese beans have started to cultivate a reputation for distinct characteristics on the international market.

“You often find these notes of black tea, spices, and dried cherries,” says Jake (not his real name), who works for Yunnan Coffee Roasters. “Strawberries and cream is also feedback we usually get from buyers.”

This is impressive given China’s muddled history of coffee production.

First introduced by French missionaries in the late 19th century, it wasn’t until the 1950s that it began to receive state support to provide exports to the Soviet Union. However, by the 1970s, production had all but fizzled out, as unrest, revolution, civil war, and a command economy had put coffee to the bottom of the agenda.

Then, in 1988, the government took a gamble and embarked on a joint UN Development Program venture with Nestlé and the World Bank to lay the groundwork for the rejuvenation of coffee production.

While the initial focus was on producing large quantities of cheap, robusta varieties for export, things changed in the 1990s when Chinese farmers started to notice the increasingly high prices commanded by specialty coffees. They became interested in the possibility of entering the arabica market and, since then, have focused on cultivating Catimor, a hybrid of Caturra and Timor, which is appreciated for its high yield, resilience, and resistance to leaf rust.

Yunnan beans have scored in the high 80s on the cupping table and have been increasingly incorporated into the offerings of roasters around the world, from Europe to the Middle East.

“Anyone asking whether Chinese coffee can compete internationally is a few years too late,” Jake says. “It already is.”

In 2015, Euromonitor, a market research firm, published a report that showed the Chinese coffee market was dominated by instant coffee: around 99% of retail sales by volume were and 98% by value were from instant.

Seven years later, the coffee market looks unrecognisable. The growth of domestic coffee roasters and café chains in particular have driven demand for freshly roasted coffee, yet there is also widespread acceptance of international brands, from Starbucks to Blue Bottle.

Jake points out that one thing they have in common is their focus on serving Chinese coffees.

“What makes Chinese coffee so interesting is the growth of the domestic market alongside the international market,” he says. “The domestic demand [for Yunnan coffees] is now outstripping exports.”

Homegrown coffee chains such as Luckin Coffee have capitalised on this trend in recent months. In July this year, the launch of its “Yunnan Red Honey series” went viral on Weibo, a Chinese microblogging website, with photos of the drink shared by millions of users. It uses anaerobically fermented coffees from Baoshan and Pu’er in Yunnan.

Manner Coffee, a Shanghai-based coffee chain which was recently valued at more than $4.5 billion, has gone a step further than Luckin by serving domestic coffee almost entirely.

“Some Chinese industries may truly be inferior to foreign countries, but, in Beijing and Shanghai, the coffee made from our Chinese roasters and baristas aren’t inferior at all, and the raw materials and equipment are also world-class,” Manner’s founder, Hán Yùlóng, told The China Project last year.

This has been complemented by a growing interest in barista competitions and education, too.

“China has a very strong history and culture of tea,” Jake explains. “This means people understand processing – it is a culture that appreciates the nuances of drinking and that understands the difference that things like altitude and soil quality can have on taste. This lends itself to coffee.”

Naturally, Yunnan and China’s other coffee-producing regions have benefited from this growing interest. The government has set renewed targets that aim to lift the rate of “premium” coffee production to 30% by 2024, while there are also plans to develop new domestic coffee bean varieties similar to El Salvador’s Pacamara.

The impact this will have on the presence of Chinese coffees in the international market is unclear as domestic demand continues to rise.

However, what’s certain is that all eyes are on the development of what many consider to be a “new” coffee origin, which some believe could one day lead the way in several key areas.

“The relative newness of specialty coffee in the country is an advantage for the industry to really get things right on issues such as sustainability and direct trade,” Jake says. “Unlike other origins, China is pretty new to coffee production, so it can really stick to its values in a way that others have struggled to.”