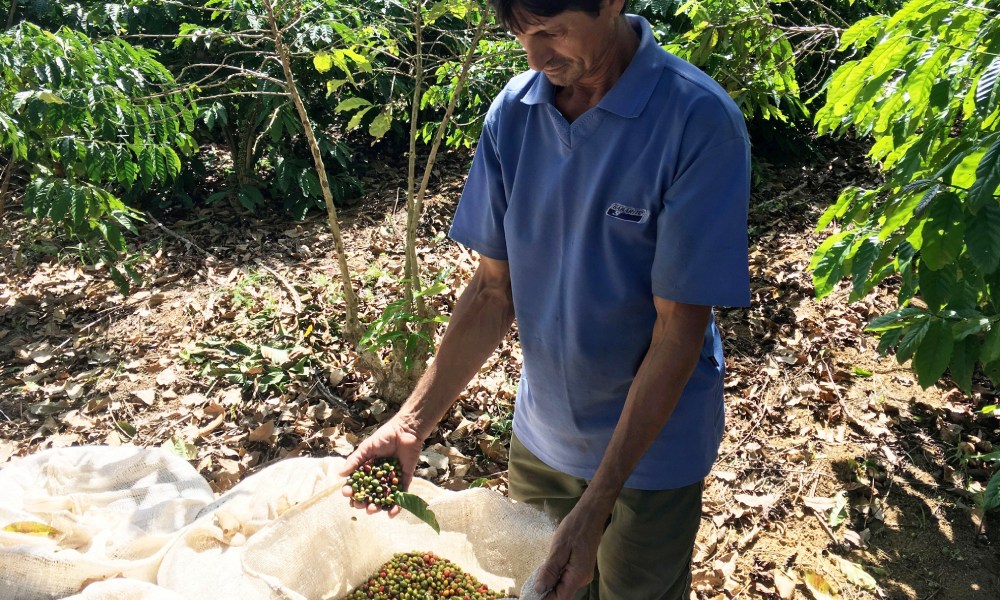 BRAZIL’S COFFEE producers have faced an onslaught of climate-related challenges over the last year, from severe droughts to intense hailstorms.

In January, unprecedented rainfall flooded coffee fields in central eastern areas of the country, while last November several regions were hit by the worst outbreak of frost in more than 40 years.

For the global coffee industry, significant changes to supplies from Brazil, the world’s largest coffee producer, can have dramatic knock-on effects.

Yet according to some experts, production figures remain optimistically high.

“I think projections close to 70 million 60kg bags of coffee are very optimistic,” Jonas Ferraresso, a Brazilian coffee agronomist, explains. “What I saw in coffee fields, and the information I obtained in different coffee regions from other agronomists is that there is no productive capacity for this much.

“A number close to 60 million looks to me and many other people in the field more plausible. And many agronomists that I talked to are even more bearish.”

Undue optimism can be damaging for coffee producers and traders, who are tied to the C market, a global benchmark for the price of arabica coffee.

If projected yields are significantly higher than real figures, it can cause the C price to fall and, in turn, means producers will receive lower incomes.

This is what has happened over the last few weeks: the price of arabica recently dropped from historic highs of more than $2 per pound to less than $1.60 per pound.

Although the high prices over the last few months have helped create a buffer, it can only protect producers for so long.

“They are very frustrated, because they are not seeing a huge season for 2022/23 in their fields and the prices are still dropping,” Jonas explains.

“The good prices in the last months are giving the farmers some extra ‘gas’ to burn before selling the other part of their stocks – but the drop is keeping farmers out of the market as far as they could. The physical market is very slow too, traders and buyers are waiting for some kind of stabilisation to get back in business.”

The discrepancy between projected yields and what on-the-ground experts believe to be true comes down to several factors.

One is the complexity of coffee production, particularly in a country the size of Brazil.

There are an estimated 260,000 and 280,000 coffee farms across 1.8 million hectares of land. Brazil’s producers manage different species and varieties of coffee, on farms of varying sizes using different types of technology. What’s more, because coffee is a perennial crop, forecasts take into account previous yields, too.

“Can you imagine how complicated it is to put that all together and have a number?,” Jonas says. “I really believe many of the projections are based on some kind of algorithm that just crosses data in some way or protocols of forecast that are not well made or developed for the Brazilian condition of sampling.”

However, he also adds that market speculation plays a role.

“A basic natural event that always happens, such as when it rains or when there are good conditions of rain in the future, the prices fall because operators already understand that a good season is coming. But this is not true for Brazilian crop conditions.

“Crop harvest is a result of a series of historical climatic events, farm investments, and management. For instance, right now in Brazil, arabica trees are developing and bearing fruits that will be harvested in May to July of 2023.

“At the same time, they are developing branches that will hold flowers from August to October of 2023, and will be harvested in 2024. This rain logic could work fine for some annual crops – but not for one that’s as perennial as coffee.”

To escape from the worst effects of C price fluctuations, a number of Brazil’s coffee producers have turned their attention towards growing specialty coffee varieties.

Specialty tends to receive premiums compared to commodity coffee and is less affected by changes on the international market.

However, specialty coffee producers still face the full effects of extreme weather conditions and, in many cases, stand to lose more as their plants are often less resilient.

“Farmers each year in Brazil are diving more into the specialty coffee farm segment in order to achieve better prices for their beans,” Jonas says. “Decades ago, Brazil was labelled as a country of cheap, standard coffee worldwide, so this change is very important.

“However, I believe an unpredictable climate is the wall that we have to overcome every season. Frost, drought, heat, and hail harm the fields terribly and could take years for the farmer to recover totally from such disasters.”