How ‘100% Colombian coffee’ became a lesson in unsustainable marketing 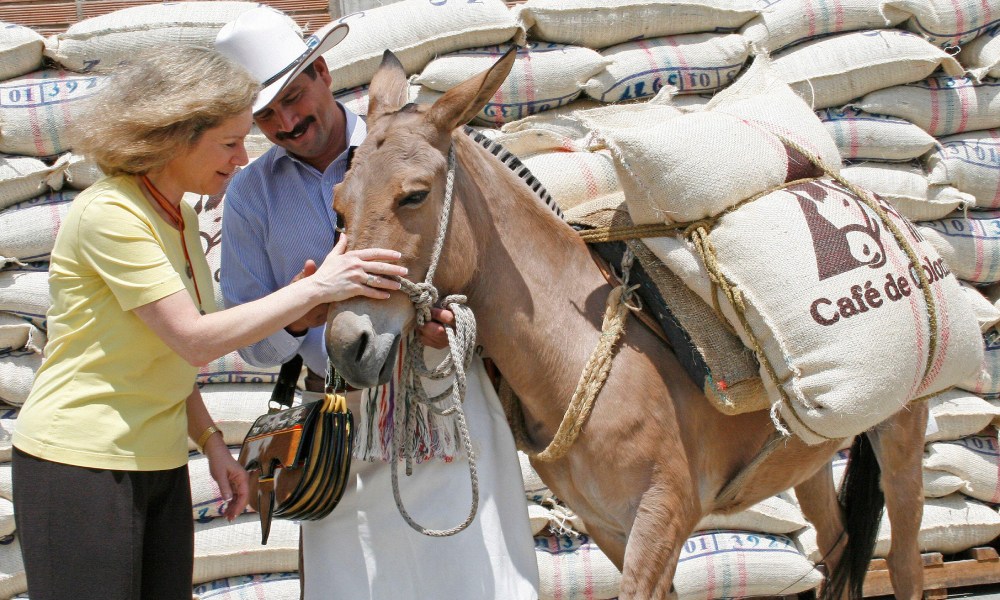 ON THE first-year marketing course at Harvard Business School, there is a popular case study titled, Juan Valdez: Innovation in Caffeination.

Across 24 pages, it details how Colombia’s national coffee association, the FNC, devised a character in the 1950s that transformed Colombian coffee into the most recognised on the world stage.

The character, Juan Valdez, together with his mule, Conchita, became the stars of countless TV commercials broadcast to US audiences throughout the 1970s and 80s.

They garnered Colombian coffee a reputation for superior quality and, in turn, price premiums in international markets. In particular, the slogan “100% Colombian” quickly became a shortcut to distinguish pure Colombian coffee as a higher quality than blended products.

“Juan Valdez must pick 2,000 coffee beans, yet he still takes every one of those 2,000 beans by hand,” says the narrator over the top of a commercial from 1972. “After all, he’s not growing the easiest coffee in the world; he’s growing the richest.”

In addition to the TV commercials, the FNC ploughed money into the sponsorship of several high-profile sporting events, with Juan Valdez even appearing at the SuperBowl.

Naturally, the results were impressive. In 2001, The New York Times reported that awareness of Juan Valdez among Americans was at 60%, while logo identification of Café de Colombia was above Nike and Michelin at 85%.

However, it all came at a cost.

The impact of Juan Valdez was quicker and more far reaching than expected.

Just five months after unveiling the character to a US audience, 60% of those surveyed said they would be willing to pay more for Colombian coffee. Meanwhile, the number of people identifying Colombian coffee as “excellent” jumped by 300%.

For a time, it had a positive impact on Colombian farmers, too. It’s estimated that the premium raised by Juan Valdez advertising was $1.6 billion during the 1990s alone.

“The FNC’s marketing drive was a great thing for the nation’s farmers,” says Eduardo Florez, who owns The Colombian Coffee Company, a London-based roastery and coffee shop. “It created huge demand for Colombian coffees, which meant the suppliers always had buyers and so the farmers benefited.”

But the FNC was spending big. Buoyed by a relatively high C price, it invested $1.3 billion in marketing Juan Valdez during the first four decades. At its peak in 1987, it spent almost $45 million on various campaigns.

Unfortunately, it wasn’t to last. An oversupply of coffee from Brazil and Vietnam flooded the market towards the end of the century, resulting in a steep drop in global coffee prices.

With it went the FNC’s marketing budget, which, by 2001, had dwindled to $5 million – just enough to cover contractual obligations. All Juan Valdez commercials were duly suspended with the federation admitting it could no longer afford to bankroll them.

At the time, advertising experts agreed that the competitive edge that Colombian coffee had enjoyed since the 1960s was hurt. ”They lost the essence of the campaign, which created meaning for the brand,” Mr. Deshpande, a Harvard professor, told The New York Times.

Since 2002, the FNC has taken a much more considered approach to marketing Colombian coffee abroad.

After creating Procafecol, it launched its own chain of coffee shops under the Juan Valdez banner which now operates in more than 14 markets around the world.

Through the chain, it also sells branded bags of coffee, while proudly describing itself as the only coffee shop owned by producers. Although Juan Valdez the character lives on (now portrayed by real-life coffee farmer Carlos Castañeda Ceballos), it hasn’t run a TV commercial for more than 20 years.

This plays into the specialty coffee notion that has seen a tendency for customers to prefer brands that “give something back” to those who put in the most work.

“Marketing has changed dramatically since the 1980s when they used to spend crazy money on TV advertising,” Eduardo says. “Customers welcome opportunities for more ethical coffee consumption, like the speciality sector focus on direct trade, and they are aware of the challenges around fairtrade and sustainability.

“With my brand, I focus on stories about Colombia, and the fact that I am Colombian and grew up there means that customers appreciate the authenticity.”

Meanwhile, some industry observers believe that the figure of Juan Valdez has become outdated as a representative of Colombia’s coffee sector. The figure has been accused of cultural fetishisation and of not chiming with the reality of a workforce that is in actuality made up 70% of women.

That said, although the impact of Juan Valdez has weakened since the heydays of the 1970s and 80s, Eduardo says its legacy has endured even as other origins such as Panama creep in.

“People already have an idea about Colombian coffee before they come into the shop,” he says. “Those two words give enough information for people to recognise a quality product.”

How ‘100% Colombian coffee’ became a lesson in unsustainable marketing