Coffee auctions: Why the gulf between origins is widening 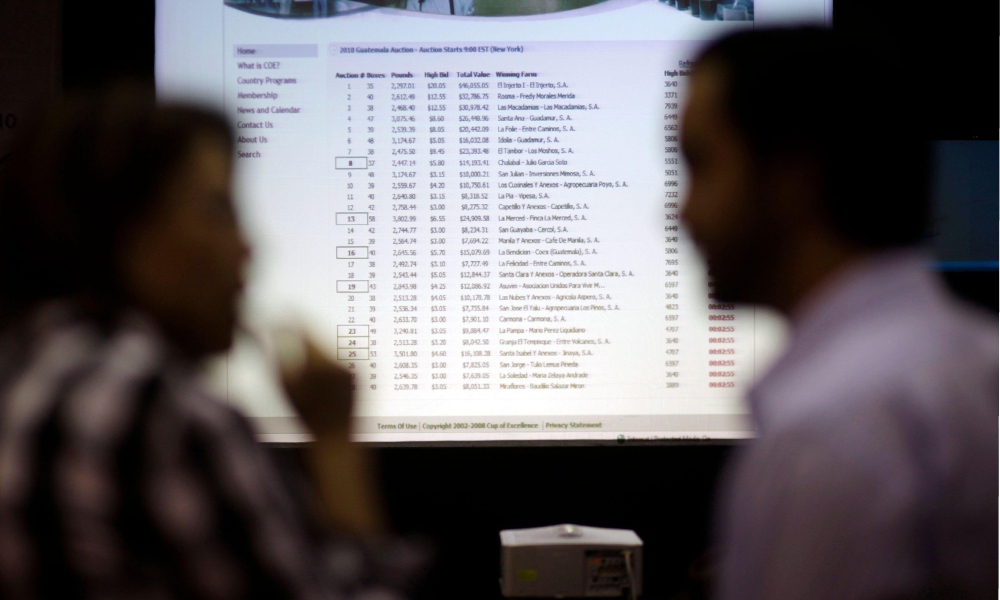 LAST MONTH, the world-renowned Lamastus Family Estates in Panama stole headlines. In a private auction, it received a record-breaking $42,238 for seven pounds of its Geisha Aguacatillo coffee.

Following the auction, the Lamastus Family Estates posted a message on its Instagram account: “We are extremely thankful to everyone involved in the auction, and everyone in the industry that are all part of these huge milestones,” it read. “The most important part is the brand value for Panama Geisha that rises with these achievements.”

Yet despite its phenomenal success, Panama Geisha isn’t the only coffee that has done well this year. A sundried natural Sidama coffee from Ethiopia fetched more than $400 per pound at this year’s Cup of Excellence (CoE) auction – the highest ever.

“I feel like I hit a jackpot,” Legesse Botasa Dikale, the farmer who grew the coffee, said shortly after winning the top award.

This sentiment was not shared by those watching the 2022 Cup of Excellence in El Salvador. Despite the top two lots scoring 90+, the highest bid was just above $72 per pound for a natural-processed Geisha – nearly six times lower than Ethiopia’s top lot and 84 times lower than the Geisha Aguacatillo.

While there has always been some price discrepancy at auctions across different origins, the gulf between the top performers and the lowest performers is widening.

Nicolas Pastellopoulos is the head of coffee at Sensible Coffee, which hosted the record-breaking Lamastus Estates auction.

He explains that a lot of the price differentiation across origins comes down to the strength of its auctions.

“Auctions are essentially tools that allow buyers around the world to find coffees that they like,” he says “Sometimes they take the form of a competition. There is a lot of merit to that system because it gives buyers confidence that they’re buying the best coffees from that country during that particular harvest.”

This is evident in the difference between Geisha from Panama compared to Ethiopia. Panama has held its famous Best of Panama competition since 1996, whereas Ethiopia launched its Cup of Excellence competition in 2020.

“From a farmer’s perspective, it feels unfair,” says Kenya-based coffee entrepreneur Uche Kaigwa, “because Geisha is the world’s most expensive coffee. It’s from Ethiopia and the difference between Geisha in Panama and in Ethiopia is miles apart.”

However, Nicolas also believes that two other factors are at play: scarcity and marketing.

“Let’s say we compare a washed Kenyan coffee and a pulped natural Brazilian coffee, both scoring 85 points” he says. “I would assume that the Kenyan coffee would command a higher price because there is less of it in the world and it’s likely to have a unique cup taste that’s impossible to replicate in any other part of the world.

“Then there’s the marketing side. If two producers have the same coffee, people will pay a little more for someone they recognise. There’s marketing value for someone who’s been doing a great job for the last ten years.”

Uche agrees. “Take Jamaica for example,” he says. “It has done a brilliant job of demarcating a region as ‘Blue Mountain range’, which means that no one outside of that area is allowed to call their coffee Blue Mountain.”

Indeed, marketing coffee in some regions has led to exposure and, by extension, better prices. For example, many of the buyers of the world’s most expensive coffees are from East Asia and the Middle East, including China, South Korea, Japan, and Saudi Arabia.

Panama Geisha and Jamaica Blue Mountain’s stock in these countries is much higher than El Salvador’s thanks to a deliberate marketing strategy that targets these demographics. Essentially, it means their perceived value is higher, even if the cup score is the same.

Purpose of the sale

While the Lamastus Family Estate’s recent auction results may have grabbed headlines around the world, Nicolas says it’s important to consider not only the quantity of the sale but also its purpose.

In many cases, record-breaking prices arise because buyers intend to use the coffee for a particular purpose, such as in a barista competition or to promote their brand to customers. A good example of this was when Californian roastery Klatch Coffee drew widespread attention by charging $75 for a cup of its Elida Geisha.

If, however, the purpose is to use it as a promotional tool, then it’s important that the buyer purchases the entire available lot. Depending on their allocated budget, this is often only possible for smaller lots – for example, seven pounds of Geisha Aguacatillo.

“If you had the same coffee and it was put into different auctions, one offering 10 pounds and the other 100 pounds, I am almost certain that the smaller lot will fetch a higher price per pound.”

That said, if farmers from El Salvador were to only put a small quantity of coffee up for auction, it doesn’t mean they would automatically receive record-breaking prices. Quality, flavour, and processing techniques also play significant roles.

“I believe we need to focus on producing better quality,” Uche says. “The plan is to bring economic prosperity to new areas and to do this the focus has to be on specialty coffee.

“Some places like Nyeri in Kenya, Lake Kivu in Rwanda, or Kilimanjaro in Tanzania, for example, have the potential to reach the same heights as Panama and Ethiopia.”

However, Nicolas says producers shouldn’t see auctions as just a tool for gaining prices well above the market average. He says they also offer an opportunity to meet buyers that can help their farms grow.

“Auctions are a great tool for buyers and producers to connect,” he says. “They are an opportunity to demonstrate the years of experience they have. Through auctions, a producer can gain some recognition and then start creating meaningful relationships with buyers around the world.”

Coffee auctions: Why the gulf between origins is widening