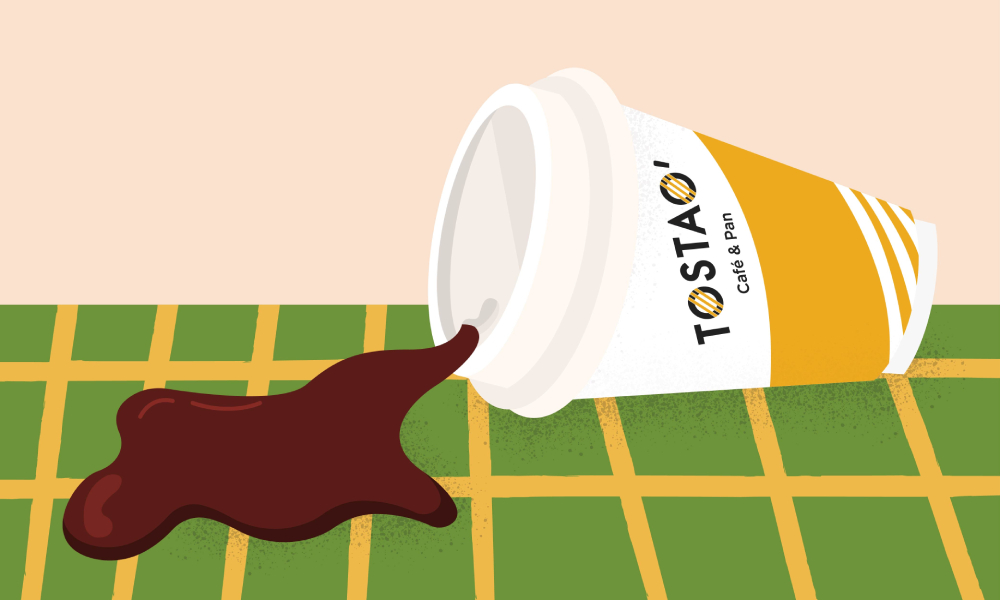 For the first time in its history, its stores had been overtaken by a company that promised to “democratise coffee consumption” and bring “fair priced goods to all Colombians”.

In just over two years, Tostao Café y Pan had leapfrogged Juan Valdez after opening more than 300 stores, and was being heralded as one of the country’s greatest commercial success stories.

With sleek, modern designs and a grab-and-go mentality, its tiendas offered freshly baked goods and a “tinto” at the comparably low price of 1,700 Colombian pesos, equivalent to less than $1.

It was also seen as progressive compared to its competitors. Of the 3,500 jobs it generated, nearly 70% were women, of which half were considered “heads of households”.

Its motto, Sin prisa, sin pausa (no rush, no pause), could even have been applied to Luckin, which was, at the time, busy pushing its way to the front of China’s coffee shop sector.

However, like the Chinese brand, the success wasn’t to last. In 2020, the crippling effects of the pandemic had caught up with Tostao, and BBI, its operator, was forced to go to the Superintendency of Companies to reorganise debts of up to 148,000 million Colombian pesos.

Today, Tostao is on the mend. But it has put a serious dent in its public reputation and, with coffee prices at historic highs, question marks continue to hang over whether it will be able to ride out the storm.

When it burst onto the scene in 2015, Tostao’s business model appeared to shake the foundations of Colombia’s coffee shop sector.

Similar to Luckin, it was built on the idea of “passing through”, rather than providing a third space, with no wifi and, in some cases, no tables or chairs. It stocked “supremo” Colombian arabica coffee and offered bread baked fresh at its vast purpose-built centre.

But what really made it stand out was its public messaging, which often alluded to the stark inequalities that existed in Colombian society and how its innovative model could solve them.

“[Tostao] was born out of a dream to make basic products like coffee and bread available to all Colombians, at a fair price, in modern stores with easy access, without restrictions,” Tostao’s then general manager, Pedro Gasca, said at the time.

It also put the idea of sin estratos at its core. Translated as “without stratas”, the idea was in direct response to its competitors which it believed catered exclusively to the middle and upper classes.

It saw Juan Valdez, Starbucks, and other specialty coffee shops, such as Pergamino, as predominantly operating in neighbourhoods considered strata 4 and 5, scaled as the wealthiest areas defined by the socio-economic stratification system. Tostao, on the other hand, planned to open across all neighbourhoods, regardless of how affluent locals were.

“While Juan Valdez has its own niche, catering to an older generation that wants something more traditional and Colombian, Tostao was seeking to cater to those in smaller towns outside of the cities,” says Kimberley Robayo Arévalo, a journalist and communications specialist who carried out extensive research into Tostao’s corporate social responsibility.

Motivated by this inclusive mission, the company embarked on an aggressive expansion programme that sought to open 500 stores in just four years.

In 2017 and 2018, a number of Colombian outlets boasted about Tostao’s quick growth and success, citing its impressive average growth rate of about 13 outlets per month, despite growing signs of uncertainty among investors, a decline in consumer confidence, and weak economic growth.

In 2017, leadership predicted ten times more income in comparison to the previous year. And by 2018, the company reported a total of 312 stores and 1,651 employees. Despite consistent reports on the number of stores and reach, information on the company’s investment levels and profit were not mentioned.

“For now, I don’t want to talk about investment,” Gasca commented in 2017. “What I can say is that we open about 16 stores per month.”

In early 2020, however, like most in the food and beverage industries, Tostao was hit hard.

In June 2020, the Superintendence of Companies (Supersociedades) announced it had accepted the emergency negotiation process of a reorganisation agreement requested by Tostao.

It’s widely agreed that there are two main reasons Tostao found itself in such a precarious position.

First is based on its aggressive yet fragile growth strategy. True to its motto, its plan was to open about 700 stores by 2020.

However, the need to open new outlets at breakneck speed, regardless of profits, required consistent investment and high cash flow – something that had begun to run dry by the time Covid-19 became a nationwide problem. As early as April 2020, Juan Valdez reported a 75% drop in sales and Tostao wasn’t faring much better.

Second, its socially-motivated business model to provide high-quality products at low prices may never have been financially viable.

Although the opening of new stores gave the impression of prosperity, it was burning through cash at an alarming rate. It was reported that its February 2020 sales, just before the pandemic hit, were only just enough to cover operating expenses.

What is clear to most now is that Tostao needs a reset.

“A clean slate for all the things that stopped us from moving forward,” Tostao counsellor Helder Jacinto, recently declared. “A new life is not only for the new year, it’s the starting point for new intentions, new services and products to continue catering to what Colombians want.”

With an agreement with its creditors in place and plans for reorganisation, Tostao seems to be on a fresh path, embodied by its new motto: borrón y nueva vida (starting with a clean slate).

It recently announced plans to open 100 stores by the end of the year and has sold its brand license to Colombia’s largest beverage company, Postobon, which aims to create “400,000 touch points” using Tostao’s branding.

However, part of the new strategy at its coffee shops involves increasing prices to cover both operating costs and to pay off its debts. Coffee is being sold at three times what it was before, surpassing Juan Valdez’s prices.

This clearly poses a threat to its original goal to bring high-quality coffee at low market prices, particularly as coffee prices rise. Tostao continues to buy all its coffee from Colombian farms, which have seen some of the steepest rises in recent months.

According to Kimberly, the challenge now is whether the company can hold onto its niche or whether it will have to carve out a new one to remain competitive.

“If we’re talking about coffee shops, the future is good,”  Kimberley says. “In the case of Tostao, it’s necessary for them to adapt to trends and find other ways to reach new clients.”

If Tostao wants to stay true to its social mission to provide an inclusive, premium coffee experience to all Colombians, then it may need to rethink what is considered fair price to those it wants to reach.

But if it wants to compete, then it needs to create a unique experience that its consumers cannot find elsewhere. For the time being, at least, Juan Valdez can rest easy.