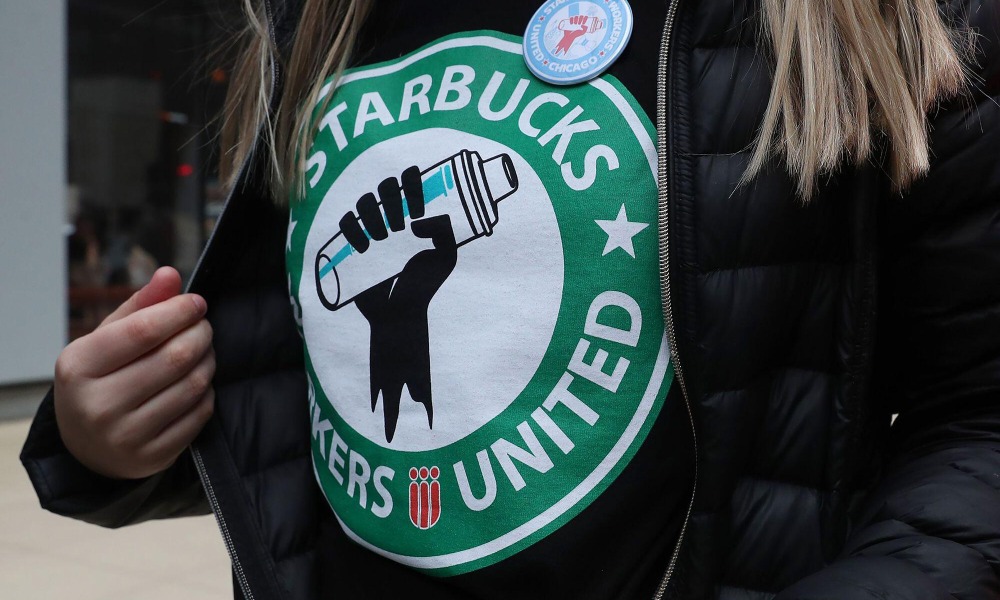 THE STARBUCKS workers union movement won a “crucial step” in its battle with the US coffee chain, after a US federal judge last week ordered it to reinstate seven employees to their former positions at a store in Memphis, Tennessee.

The group – known as the Memphis Seven – were fired from Starbucks in February this year after taking part in an in-store interview with a local television station about their union effort.

The US National Labor Relations Board (NLRB) was found to have provided sufficient evidence that the dismissals were motivated by anti-union feeling.

In a statement, NLRB general counsel, Jennifer Abruzzo, called the decision “a crucial step” in ensuring that “all Starbucks workers can freely exercise their right to join together to improve their working conditions and form a union”.

Since December 2021, workers at more than 200 Starbucks stores across the US have voted to unionise. The first was a store in Buffalo, New York, with employees asking for a minimum wage, and improved maintenance of its facilities and equipment.

Starbucks maintained it fired the workers because they violated store policy by letting non-employees into the shop after hours, but the baristas’ union, Workers United, said the terminations were retaliatory.

In a statement following the district judge’s verdict, Starbucks said it planned to appeal the decision.

Why are baristas unionising?

It’s been a turbulent year for the world’s biggest coffee chain. Since late last year, a union movement has sprung up and gained considerable momentum across its US stores.

To date, over 200 stores in 30 states have officially voted to unionise, with many more of the country’s 9,000 expected to put the question to workers.

Among the grievances aired by Starbucks’ baristas are stagnant wages and the safety of working conditions. It’s thought that a combination of factors, including the impact of Covid-19 and the arrival of President Biden’s pro-union administration, have created a perfect storm for the movement.

Evidence that the sentiment is country-wide is reflected in the fact that Starbucks is not a alone in facing a disgruntled workforce: employees at a number of companies, from Amazon to Apple to Trader Joe’s, have also begun to see collective bargaining power as the only route to fairer treatment by employers.

The NLRB reports that petitions for union elections are up 56% this year, compared to 2021. This is a stark turnaround from the long, steep decline in union membership rates that has occurred since the 1950s.

“It has to do with the pandemic,” Laura Garza, a barista who helped organise a successful unionisation vote at a New York Starbucks brand, told CNBC in a recent interview. “It made a lot of workers that continued to work during the pandemic reevaluate what is most important to them. And honestly, it has to go to better pay, liveable wage for everybody.”

Young people in particular seem to be driving the change. Joseph Thompson, a Starbucks employee based in Santa Cruz, California, told the Washington Post at a worker protest back in April that just “one person was above the age of 35” and that most were either “millennials or Gen Z”.

However, while the wave of unionisation is touching a number of companies, it’s the way Starbucks has responded that has led to widespread criticism. The Guardian, a UK newspaper, reported this week that the coffee shop giant had created a “culture of fear”, with more than 85 workers involved in organising unions dismissed in recent months.

It was also reported by The New York Times yesterday that the NLRB was seeking compensation for Starbucks workers from whom it said the company had illegally denied raises. It said that baristas who had joined unions were being discriminated against by being refused wage and benefit increases that the company put in place for nonunion employees.

The decision in favour of the seven Memphis workers, however, is considered the first major victory for the chain’s baristas and one which many hope will clear the path for further unionisation efforts.