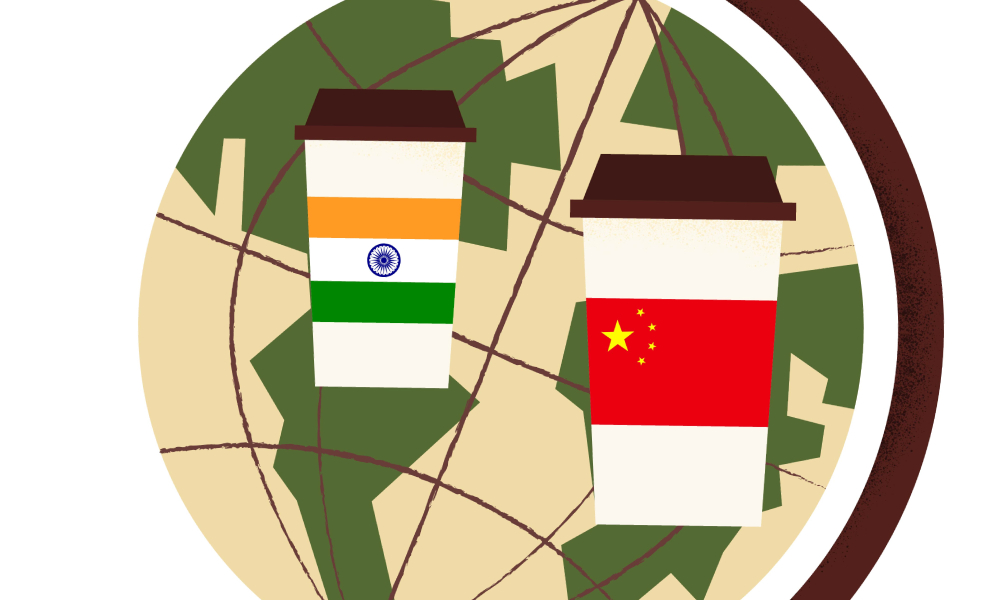 WHETHER WE like it or not, Starbucks can be a fairly accurate indication of a country’s burgeoning interest in coffee.

On paper, China and India share a number of similarities. Both have populations exceeding a billion. They were both included in the “BRIC” nations that economists believed would become major manufacturing hubs by 2050.

Both are traditionally tea-drinking countries with small but well-established coffee-producing sectors. And both have rapidly expanding middle classes, with healthy disposable incomes and a keen interest in the habits of their Western counterparts.

However, over the years, Starbucks’ approach to expansion in India and China has differed considerably. While the US chain took a bet on the Chinese market in 1999 and has gone on to open more than 5,400 stores across 200 cities, India has just 280 stores ten years after entering the market.

Clearly, Starbucks alone is not enough to tell the full story, with a number of domestic and international coffee brands embarking on their own expansion strategies.

But it speaks of a wide gulf that exists between the two countries in terms of coffee consumption: as China’s grows at an annual rate of 15%, India lags behind, having increased by less than 1% since 2017.

So what’s causing such a discrepancy?

India has a long and complicated history of coffee cultivation dating back to the 17th century. Originally focused on arabica production, an outbreak of white stem borer and coffee leaf rust towards the 1900s threatened the sector and forced a widespread shift to robusta.

Today, most of the country’s coffee production comes from the southern states of Karnataka, Kerala, and Tamil Nadu.

However, until recently, producers were only allowed to sell to the Coffee Board of India – the governmental arm responsible for promoting coffee production. With little coffee entering the country from overseas, some believe this stifled any hopes of a widespread coffee culture before the turn of the century.

“In the 1970s, the quantity of coffee production seemed to be a larger priority than its quality,” says Sunalini Menon, who works as President of Coffeelab in Bangalore and served on the Coffee Board of India for more than 20 years. “We were hardly importing any coffee from elsewhere nor was international travel to attend trade events easy; hence, there was no benchmark for quality and the economy was also not in the best shape.

“Even though we were sent to Switzerland and Germany for training, improving the quality of our coffee at the time was very challenging given our limited resources. Also, until 1995, farmers could only sell their coffee to the Coffee Board of India, which would sell it on.

“Once that was done away with and farmers were free to sell directly to whoever they wanted, the quality of coffee started improving, independent roasters and cafes slowly started coming about, and Indian coffee really got the attention it deserved.”

China, on the other hand, has been fairly liberal in its attitude to coffee production, which has helped drive interest in domestically grown single origin coffees today.

In 1988, a UN Development Programme with the Yunnan government, the World Bank, and Swiss coffee manufacturer Nestlé, helped foster the emergence of a more contemporary system with higher investment in production and farmer training.

As a result, Chinese cafés up and down the country now serve high-quality single origin coffees from Yunnan. For example, Luckin Coffee, China’s largest coffee chain, recently launched its Yunnan Red Honey series which has helped propel the brand to “new heights”, according to local media.

Meanwhile, Manner and Seesaw, two other popular Chinese coffee chains, recently launched their own commitments to Yunnan single origin coffee with the “Good Coffee Made in China” and the “Yunnan Ten-Year Plan”, respectively.

“The Chinese have covered a lot more ground than India by putting effort into areas like marketing, training, and expansion at a very early stage,” Sunalini explains. “Hence, their coffee culture has become much more visible.

“They have had the funds for it from early on and they also host many more international events, like barista competitions, tastings, and cuppings, inviting coffee-consuming countries to participate in them, which gives them a lot of exposure.”

Yet none come close to the billion-dollar valuation of Shanghai-based Manner Coffee. Nor do any threaten the position of Starbucks as global market leaders like Luckin.

The nature of expansion could be the difference. In China, it is common for startups to adopt a strategy of rapid and aggressive growth within the first year after launching.

Be+Star Coffee is the most recent example. Having opened its first store in January 2022, it is already operating 18 stores and has stated its plans to open 500 within the next three years. It’s for this reason that Shanghai, the world’s largest coffee shop market, has nearly three shops per 10,000 people.

Blue Tokai Coffee Roasters, one of the leading specialty coffee chains in India, on the other hand, took a few years to expand and go multi-city.

Chinese brands have also harnessed the power of technology to draw in a loyal customer base and tap into a younger generation that has grown up on smartphones.

Luckin, for example, recently reported that the majority of its sales are made through its app. To order a coffee directly from Blue Tokai without the use of a third-party app, meanwhile, customers must call the company’s number on its website.

However, while it may not be at the same speed as China, India’s coffee culture is showing strong signs of developing, reflected by emerging interest from international brands.

Canadian coffee chain Tim Hortons says it is planning to open more stores across the country this year after arriving in New Delhi and others such as Coffee Bean & Tea Leaf, Costa Coffee, and Gloria Jean’s Coffees are also expanding existing footholds.

Sunalini says that the strong potential of India’s coffee producing sector could also help provide an edge in the future compared to China’s burgeoning coffee culture – but it demands exposure overseas and governmental support.

“India is the sixth-largest producer of coffee in the world, ahead of China, and all the coffee is shade-grown,” she explains. “There are some wonderful varieties and qualities on offer and we need to talk to the world about them. That is where we need to really scale up our global interaction, marketing, and possibly request for more support from the government.”