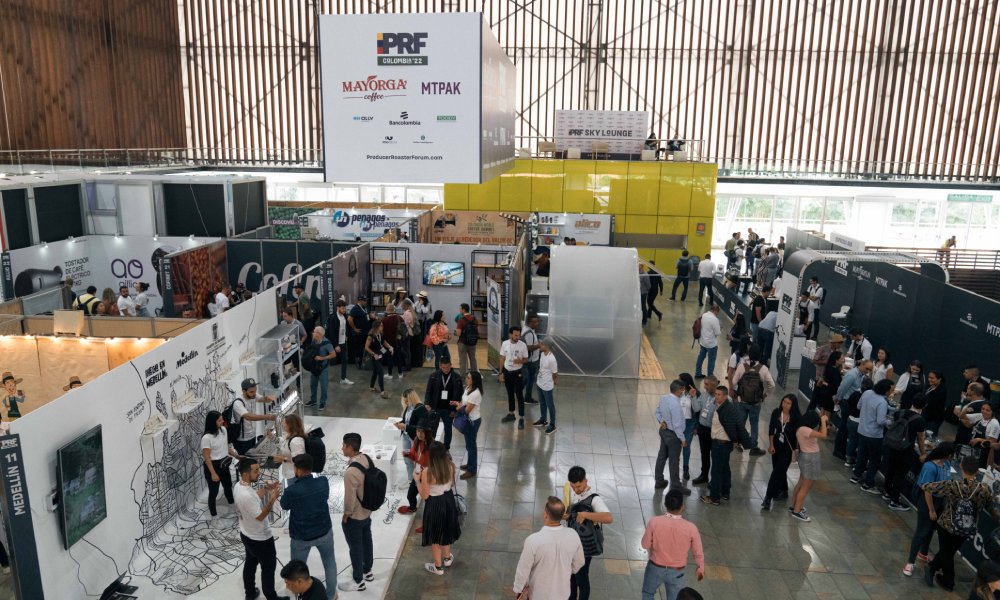 The announcement was met with a palpable sense of excitement: next year, Producer & Roaster Forum would return to El Salvador for its sixth instalment.

It provided the perfect end for what has been an immensely successful two days at Plaza Mayor in Medellín, Colombia. A whole host of cuppings, workshops, competitions, and keynote speeches filled both days, with a number of world-famous industry figures also making appearances.

On Stage One, three-time UK Cup Tasters Champion and author Freda Yuan delivered an enlightening talk on the value of blends alongside Tony Dreyfuss, while 2022 World Barista Champion Diego Campos pulled shots alongside 2017 champion Dale Harris in the afternoon, drawing a huge crowd of spectators.

“My experience at PRF has been excellent,” said Freda, who also ran a sensory analysis workshop. “I’ve met so many producers and roasters, and I think it’s an event that connects both sides together. It’s amazing that I’ve been able to share my knowledge here in Colombia.”

The second day at PRF Colombia also produced champions for the event’s two competitions: The Cold Brew Championship by Toddy and The Barista Jam by Pergamino.

“It’s been an incredible opportunity to teach about cold brew,” said Julia Leach, the founder of Toddy LLC, who sponsored the Cold Brew Championship. “But also to learn how our equipment and expertise can help others in the region.”

In addition to competition winners, PRF also picked up where it left off on Thursday with a number of deals made between roasters, traders, and smallholder farmers, and a series of keynote speeches and panels across stages one and two.

Highlights included Edwin Noreña’s insightful talk on the value of experimental processing, Luke Schneider’s discussion on branding in the coffee sector, and Juan Felipe James’ insight on how to always win in negotiations.

“This event is very important because producers are at the centre of it,” said Tony Dreyfuss, who spoke about the value of blends on Stage One. “It’s been a wonderful learning experience. I’ve felt a lot of community between everyone here.”

As the day came to a close, PRF announced that its next instalment will be held in El Salvador, with precise details to follow in the coming months.

Henry Wilson delivers opening speech about importance of producer-focused events. The PRF founder spoke about the necessity of putting producers front and centre of the industry as he marked the event’s launch in Medellín, Colombia.

Freda Yuan’s cupping workshop offers alternative approach to sensory analysis. The three-time UK Cup Tasters Champion and head of coffee at Origin Coffee Roasters captivated participants of her sensory analysis workshop, demonstrating how all the senses can be harnessed to “taste”.

Attendees sit on the floor to hear Julián Cucuñame’s talk on controlling variables in coffee processing. CuBa BIOTEC’s scientific director gave an enlightening talk on Stage Two, which attracted more people than there were seats.

El Salvador announced as next Producer & Roaster Forum host. The Central American country was unveiled as the host country for a second time, having first been held there in 2016.