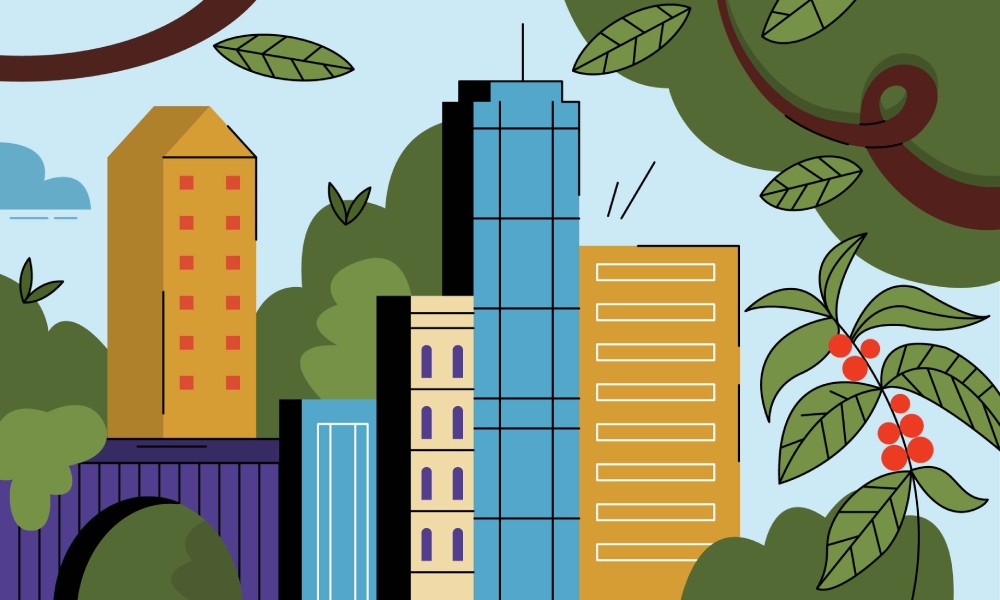 COFFEE HAS always grown in Medellín.

For generations, some of Colombia’s best coffees came from the barrios surroundings its second city – known as the City of Eternal Spring – thanks to its pleasant climate and frequent rainfall.

But over the last few decades, internal migration and the escape from armed conflict brought an influx of caficultores desplazados – displaced farmers – from the rural towns and municipalities across Antioquia.

Many continued their agricultural practices and, as a result, Medellín is today home to more than 400 coffee-growing families, who cultivate high-quality coffee just 20 minutes from the city centre. Their tiny plots, spread across Aburrá valley at 1,900 masl and above, can be found everywhere from La Sierra and Comuna 13 to Belen and Santo Domingo Savio.

Unsurprisingly, these urban coffee farms differ in more ways than one from their rural counterparts. However, it’s not just geography that separates them; many of the city-dwelling producers feel as though they have missed out on opportunities afforded to larger, more commercial farms.

For example, until recently, getting the parchment coffee out and sold was extremely complicated as there were no local points of sale. The presence of the national coffee growers federation (FNC) was also limited, which meant few agronomic extension services.

What’s more, most producers in the area have lacked adequate infrastructure to process their coffees themselves and many still live without running water or electricity – despite living within the city limits.

“In the Sierra, the first farm we bought coffee from was Gabriel Cortés’ and they still do not have access to electricity or drinking water,” says Joan Molina, one of the owners of Rituales Café, which sells coffee from a group of 40 allied urban producers in the La Sierra neighbourhood.

“If Gabriel wants to watch TV, he must go down into the barrio. That’s crazy and it’s crazy because it shows the inequity of life in the city. Gabriel’s farm is 20 minutes from the nearest, unpaved byway in Medellín, and that’s still Medellin – but it’s an invisible Medellín.”

An act of resistance

Since launching Rituales in 2016, Joan has been passionate about revitalising Medellín’s coffee-producing sector. Born and raised in the city, he believes firmly in the concept of “reconciliation through urban coffee-growing” – the idea that displaced farmers could continue to earn a sustainable living in the city by growing coffee.

“Urban coffee farming is an act of resistance,” he says. “The farmers who relocated to Medellín were forced to leave their coffee-producing lands. So continuing their coffee-farming tradition is a powerful way to reconcile with their refugee experience. It’s about dignity and preserving their former way of life.”

Violence between the government and paramilitary groups raged for nearly 60 years before a peace agreement was formalised in 2016. During the conflict, it’s estimated that between 4,500,000 and 5,700,000 Colombians were displaced, mostly from the country’s rural and remote areas.

Those who left could often take only what they could carry, which meant they had to start again once they resettled. Yet growing coffee is not a get-rich-quick scheme. It takes years for new plants to yield fruit and, even then, profit margins are low.

As such, a big part of Joan’s mission involves paying a premium for locally-grown coffee, sometimes almost double the going rate. This way, he ensures that Medellín’s farmers can earn a sustainable income and continue growing coffee at a profit.

The future of urban coffee farming

What Rituales and their allied producers from La Sierra set out to do was no easy task. They began working with just one family, but quickly realised there was way more coffee growing in Medellín than they had imagined.

Together with the community, they began to develop a model through which urban farmers could make a living doing what they loved most, while engaging in a more equitable supply chain. Namely, a supply chain that promoted visibility, sustainable agricultural practices, and post-collection processing focused on quality.

In La Sierra neighbourhood the coffee farmers utilise a model of processing not often seen in Colombia. They collectively process their coffee at a micro central de beneficio, a small community wet mill called Proyecto Renacer, where the objective is to provide support, guidance, and the tools necessary to produce high-quality coffees affordably.

They focus on traditional washed processing, applying techniques that any farmer could use at home., while also helping ferment, wash, and dry the community’s coffees, which they buy in cherry form.

Although this centralised processing might seem risky when it comes to quality control, the idea is to pay the farmers as efficiently as possible and let them focus on the cultivation stage. It doesn’t necessarily require expensive machinery, such as tanks and de-pulping machines, nor prolonged weeks of carefully monitored drying.

One of the local farming families runs the wet mill, where they are paid a salary with benefits. They received training and now separately process the coffee of each allied producer. The farmers arrive with their cherry, which gets weighed and the parchment yield calculated, which is what they are paid for on the spot – plus a premium.

The central de beneficio has also become a community gathering place where the farmers can try their own coffees after it has been roasted at a multi-roaster called La Fabrica in the downtown arts district.

As Medellín’s coffee farmers develop, the local authorities are starting to change their own attitudes towards them.

This year, the mayor’s office paid 340 local coffee growers a total of 260 million Colombian pesos to put toward tools and inputs. The local government has begun to promote urban coffee tourism with the goal of attracting international markets and buyers to highlight what has become Medellín’s main agricultural product.

All this feels like a step in the right direction for Joan and others helping their country’s displaced farmers. And as the urban coffee sector continues to evolve, there’s no doubt the displaced will become an established home for coffee.