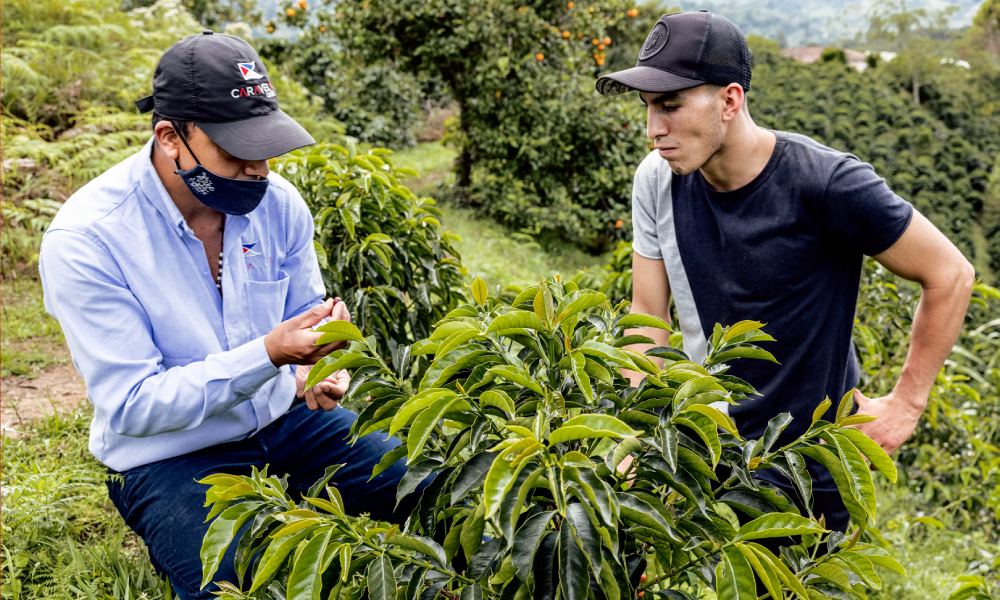 A SUSTAINABLE income is a luxury that most people take for granted. In simple terms, it means living each day safe in the knowledge that your wages cover everything you need to support the livelihood of you and your family – from food and electricity to water and rent.

However, in Colombia, the percentage of coffee producers who receive a sustainable income is low; by some estimates less than 40%.

This means that the majority of coffee producers struggle to not only reinvest in their farms, but support their family units. When the global price of coffee falls, it can even drive them below the poverty line, where they are unable to afford basic necessities, such as education and healthcare.

Pedro Manga is sustainability coordinator at Caravela Coffee, a specialty green coffee trader. He says that while the existing model of trade is efficient, it may not be the optimal for all stakeholders.

“Coffee producers have to take the price that is given to them by algorithms and speculations in the C market,” he says. “They have to sell on those terms. But that’s not how normal businesses work.

“Normally, you would estimate your costs of production and offer your product at X amount above the costs of production. That’s how usually how products and services are offered to the market. But in coffee, the market tells them what the price is. I think that’s a huge part of the problem.”

For roasters and consumers, the solution to coffee’s sustainable income crisis can seem simple: just pay more. It is often said that if the average price for a bag of coffee was $15-25, it would alleviate poverty and provide producers with enough money to reinvest in their farms.

But as well as being simplistic, Pedro explains this ignores the effect it has on costs of production.

“It’s not about just paying more,” he says. “It’s a matter of everything. If the price is growing, then costs of production could also rise. Not necessarily at the same rate, but they won’t be static. It depends on the farm size, the productivity, and also the coffee being sold, such as whether it’s commodity or specialty.”

There’s also the issue of transparency. Paying more might increase the price per kilo of green coffee, but, with such a long and complex supply chain, it won’t necessarily be proportionate.

“You cannot pay more if you can’t trace the payment back to the producer,” Pedro says. “There needs to be more transparency, such as by taking advantage of technology to develop tools that trace coffee.”

For example, Caravela uses Atlas, an internally developed tool that helps them trace every kilogram of coffee they trade. This ensures that when prices do go up, they can track how much farmers benefit.

Paying more for coffee can help bring some farmers above the poverty line – but not all.

Pedro explains that a movement towards more farmer-focused negotiations that incorporate the voice of the producers is more effective.

“Negotiations should include all the stakeholders, including the producers,” he says. “It needs to be an agreement, where the ones buying the coffee actually ask, ‘How much does your coffee cost to produce?’ It’s about moving away from algorithms and bringing producers into the conversation.”

That said, it can be difficult to ignite negotiations without the numbers. Even producers may struggle to calculate the exact amount it costs for things such as labour costs, fertiliser, and post harvest processes.

Having identified this stumbling block, Caravela works to provide a model that both producers and roasters can use to effectively calculate costs of production and ensure the prices being paid are enough for a sustainable living income.

Through partnerships with other exporters and NGOs, they have been able to integrate exporter data and work out a consensus cost of production for each region in Colombia where they operate.

They then constantly monitor costs of production to ensure the model is up-to-date and continuing to serve the needs of producers.

Caravela Coffee is a Host Sponsor at this year’s Producer & Roaster Forum in Medellín, Colombia.