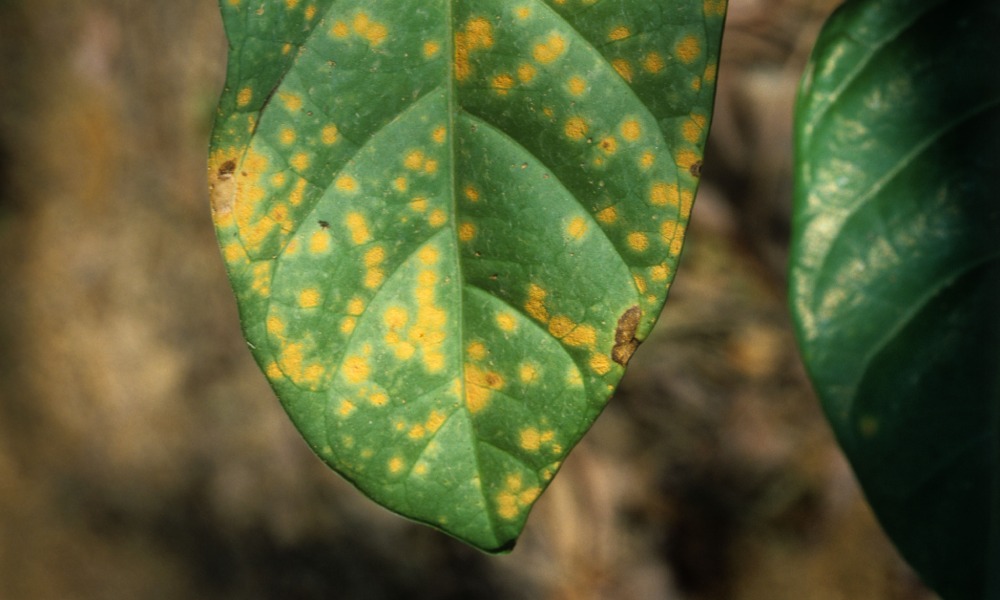 FOR NEARLY 200 years, coffee leaf rust has struck fear into coffee farming communities around the world.

The devastating fungus, so-called due to the fine orange dust it creates on the leaves of coffee plants, has the potential to wipe out entire coffee plantations and, in turn, destroy the  livelihoods of farmers who rely on healthy plants for their income.

Despite the widespread use of fungicides, coffee leaf rust is thought to have caused damages and profit losses stretching into the billions in recent years. This follows a wave of outbreaks in Latin America between 2008 and 2011, which is thought to have reduced Colombia’s coffee production by as much as 31%.

It has long been suggested that climate change is one of the main culprits, with rising temperatures and unpredictable rainfall allowing it to reproduce and spread more quickly.

However, research carried out by a UK university indicates that the direct link between climate change and coffee leaf rust may be more tenuous than first thought.

In 2016, a team of scientists led by Dr Dan Bebber from the University of Exeter in Devon, UK carried out a study into whether a recent outbreak of coffee leaf rust (CLR) in Colombia was linked to climate change.

Specifically, they sought to test the hypothesis that “the weather was responsible for a recent outbreak of CLR in Colombia and that climate change increased the probability of weather conditions favourable to CLR”.

In their paper, they concluded that there was “no evidence for an overall trend in disease risk in coffee-growing regions of Colombia from 1990 to 2015”. They found that while weather conditions were more conducive to disease outbreaks from 2008 to 2011, they “rejected the climate change hypothesis”.

Instead, the team identified that it was more likely caused by problems in disease management, most notably in the incorrect or incomplete use of fungicide treatments.

According to Dr Bebber, this was in part due to a global increase in fuel prices brought on by the recession, which pushed up the cost of fungicides. Any fungicide treatment has to be carefully balanced and incorrect use affects both the spread of the disease and the ability of plants to recover.

The long road ahead

“For coffee growers, whether coffee leaf rust is caused by climate change or not is neither here nor there,” Dr Bebber tells me. “What they are interested in is solutions.”

The two main options for combatting CLR are resistant varieties and fungicide treatments.

Coffee research institutes around the world are investigating new ways to develop varieties resistant to CLR. Dr Bebber describes a resistant variety as “the golden ticket” for farmers, but stresses that it is far from easy. The process can take decades and, importantly, “the coffee also has to taste good”.

Treatments such as fungicides are still an option but, as the University of Exeter study shows, they have to be carefully managed in order to be effective.

They are also at odds with rising consumer interest in organic production, while being problematic for those growers and roasters moving towards certification. In addition, treatments need to be constantly monitored as fungi can develop resistance to certain chemicals.

Dr Bebber points out that the increasing impact of CLR on coffee harvests is, in part, a response to modern agricultural techniques. They tend towards relying on fewer varieties of a crop to ensure consistency, which is easier for growers and buyers to manage. “The trade-off,” he says, “is a lack of resistance.”

They recently revealed that Coffea stenophylla – a rare and threatened coffee species from West Africa – has shown positive signs of CLR resilience. They have plans to plant stenophylla seedlings in Sierra Leone and Reunion Island to carry out further assessment.

However, Dr Bebber, who is now collaborating with the University of Arizona to study CLR management in Jamaica’s Blue Mountain region, explains that there is still a lot to be learnt about the disease.

“There’s a lot that’s really not known about the fungus,” he says. “We really need to know how you manage the disease in a way that maintains a high-quality product and minimises environmental impact.”