Are avocados the ‘green gold’ coffee farmers have been promised? 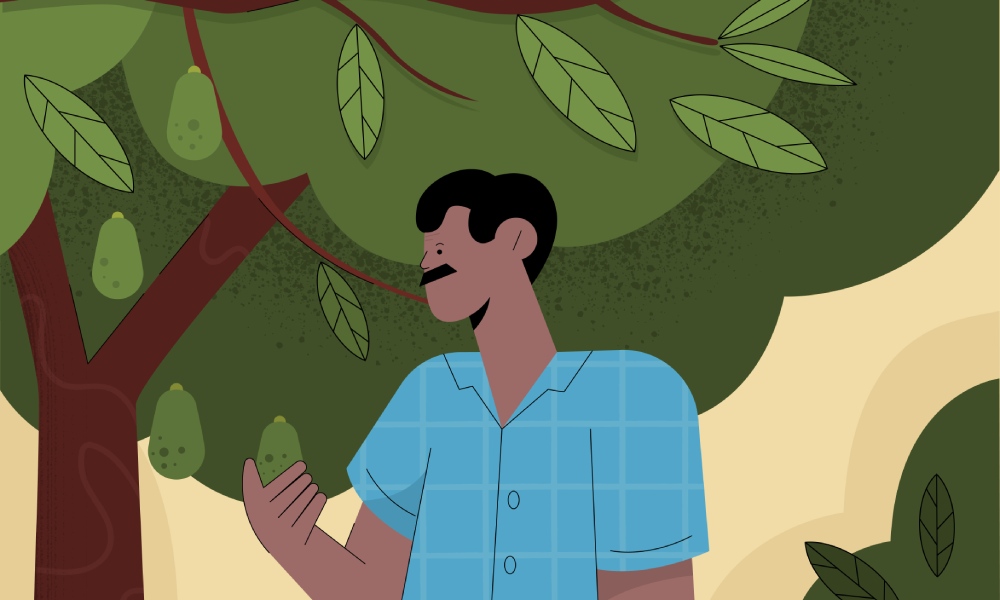 COLOMBIA IS globally renowned for its coffee production. But, increasingly, coffee farmers are responding to the challenges of market volatility by replacing their coffee plants with hass avocado trees.

Rapid expansion of avocado farming in Colombia began in 2014, with an output of around 1,400 tonnes. Just six years later that figure had soared to a staggering 545,000 tonnes, making it the third-largest avocado exporter in the world.

This directly corresponds to growing demand from the West and, increasingly, China and Japan. In 2020, some $2.6 billion of avocados were sold in the United States, representing more than double the sales value in 2014. This is thanks in no small part to the marketing efforts of organisations such as the Hass Avocado Board, which have positioned the fruit as fundamental to a healthy, vegan lifestyle.

Other major export countries have also responded by raising production levels. In 2019, Mexico planted more than 234 thousand hectares of avocado trees, up from 168.11 thousand hectares in 2013/14. It was reported in February 2020 that an avocado truck full of avocados was leaving the Mexican state of Michoacán every six minutes.

At first glance, the decision to switch to avocado production – or at least its incorporation into coffee-growing regions – seems an obvious one. Global coffee prices have fallen significantly and many small-scale farmers have struggled to survive on low profit margins from coffee alone.

Avocados, meanwhile, have been dubbed “green gold” thanks to their rapidly growing demand and the willingness among consuming countries to pay ever higher prices. In East Africa and Nigeria, farmers have even praised the crop as an “antidote to poverty”.

However, making the switch is not without challenges.

What are the challenges?

Avocados are a lucrative crop, with the international market forecast to reach $17.9bn by 2025. However, for coffee farmers looking to enter the market, there can be significant challenges to production.

For one, it is difficult to manage not only the initial cost of purchasing avocado trees, but their upkeep over time. Production is more labour intensive than coffee and avocados require refrigeration to travel, bringing further associated costs. This is coupled with a three to five year delay between planting and fruit production.

Federico Alvarez is general manager at Frueco Fruit, a Colombian exporter. He points out that buyers in key markets such as North America and the EU often prefer farms which only produce avocado as it is easier to manage certification such as Global Gap or Rainforest Alliance.

This means farmers can find that “for better prices, they have to have a monoculture and do not actually achieve crop diversification”.

What’s more, many industry observers predict that the global production boom means an avocado glut and a drop in price is inevitable, with Alvarez hinting at a possible turnaround of fortune within two to three years. “Prices are likely to drop, sending farmers into financial difficulties,” he says.

The avocado boom has also generated debate around the issue of sustainability. A World Economic Forum article states that extensive avocado production could have “substantial and irretrievable environmental costs”, specifically due to widespread land clearance.

There are concerns that foreign producers, in particular from Peru and Chile, are buying land in areas previously unassociated with avocado production, which could impact mountain ecosystems and endangered species, such as the wax palm.

In Colombia, concerns are directed predominantly at the use of water: it takes approximately 2,000 litres of water to produce one kilo of avocados, which could lead to shortages for other, less profitable crops.

According to Alvarez, it is difficult to know the true extent of avocado production in Colombia as many farmers are still in the process of switching. “There will be high yields after five to seven years – and then we will see how much production we really have”.

However, he also notes that the trend is not, as some observers worry, enough to pose a direct threat to the well-established coffee-culture in rural Colombia.

On the contrary, he believes the two can co-exist, with the transition to avocados bringing benefits to rural areas, while “making the campesino an entrepreneur”. Indeed, a recent paper on avocado production in Giheta-Burundi found that when supported by both the private and public sectors, a thriving avocado sector could help reduce poverty and lead to better living standards for farmers.

Avocado trees have a life span of 10 to 20 years. It is difficult to predict if its current popularity will continue, although some observers have pinpointed 2030 as the year in which demand for avocados will peak.

Whatever happens, Alvarez is confident that there will still be “high global demand for exotic fruits”, and suggests passion fruit might be one to watch in the future.

Are avocados the ‘green gold’ coffee farmers have been promised?